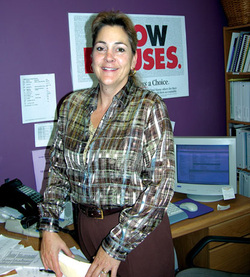 Lorie Hino-Boddie is a South Carolina woman who shot her husband
in the chest. After a history of heart-break, both losing her mother when she was 16 and a child when it was only 2 weeks old, Lorie says she “wigged out.” Her and her husband had a cocaine addiction and an abusive relationship. He would beat her as often as twice a week, and often threatened her with guns. He even shot at her once. Uncertain of the incident, Lorie shot her husband while her children were sleeping. Lori pled guilty to voluntary manslaughter and served 7 years in prison. While in prison she was not allowed to have contact with her children, and since she was released they have not been able to have a relationship. Lori went back to school and got her bachelor’s degree. She now works as a Domestic Violence Coordinator, Lorie is responsible for the overall support to SCCADVASA member Domestic Violence programs.  Responsibilities include the identification and provision of educational resources, consultation on program development and expansion, consultation and collaboration with affiliated agencies to develop policies, procedures, and curricula designed to enhance services to victims of domestic violence and to provide appropriate educational resources to these agencies. She wanted to serve the organization which helped her cope with her domestic abuse while she was in prison. She hopes to continue to help against domestic violence.