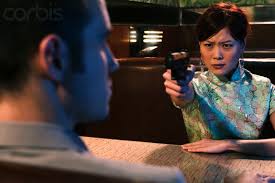 Henrietta Briones is a Native American/Mexican American from
California who was imprisoned for the killing of her abusive boyfriend. During
their two year relationship her boyfriend was abusive both physically, mentally
and economically. Briones sought protection from the police and a shelter for
local battered women, but they did not offer the protection she needed. During a
confrontation where she feared the safety of herself and her children, she shot
her boyfriend. She was released on parole in 2004 after serving the minimum 17
years of her 44 year sentence.